On The Trail Creations
Variations on striped backgrounds
There are many ways to vary a striped background and still keep it fairly simple! Curvy stripes, wonky but still straight, or pieced stripes. Here are some examples of each of those.

Curvy stripes
The Tundra Caribou quilt uses a gradation of colors, as well as some decorator fabrics in addition to quilt fabrics for some added texture. The owl quilt uses fabrics that are pretty much all the same value and similar colors. The mini leaf wall hanging has vertical wavy stripes. There will be instructions in Lesson Three for how I do these, no curved piecing.

Create a world with three fabrics! (or two, or four, or…)
One of my favorite things about curvy stripes (or even straight sometimes) is that the right choice of fabrics makes it really easy to make something that looks like a landscape. As long as the top one looks at least a little bit like sky, it automatically looks like a ‘world’. I usually recommend at least three, but the polar bear greeting card gets by with only two in the background. If you make your curves a bit pointy, they become mountains! The polar bear quilt has mostly straight stripes, but the mountains plus very 'skyish' fabric clearly define this as a landscape. If there is water as a 'stripe', the top edge needs to be straight, unless it's obviously waves, as that is how water looks in the distance. (camper card) There will be other examples of creating a world with fabric throughout this class… most of my sample quilts use more than one of these techniques, so I have to choose where to put them in the class!

4. Confetti or collaged background
The ‘stripes’ aren’t as obvious in some of these, but they still roughly go from one color or value to another, so it can help to think of them as stripes. Generally these are lighter at the top and darker at the bottom, but that isn’t a rule.
This type of background is starting to depart from the 'super simple' category, but I thought I'd include at least a mention for anyone who is interested. I now have a whole class devoted to just this technique! Called Framed Collage Class, it goes into much more detail than I will here. Basically, you cut up small to medium sized pieces of fabric, lay them on your batting, usually in a gradation from light to dark, but not necessarily. Then cover the pieces with a layer of netting/tulle, pin well, and quilt it all together.

5. Scrappy improv
This is another really fun and easy way to get a background. They don't really look like a landscape, but can still be a good background for flowers, animals, leaves, and more. For the first batch below, I cut batting and interfacing/backing 5 x 6", then put rectangular scraps to cover it, overlapping them a bit. It can help to start with a colorful print and pull the other colors from that. Once the batting is covered, I quilted straight lines through all layers, a walking foot helps a lot for this step. One edge got scrunched, so I put the applique over that rather than fixing it! I then added simple appliques on top of the background. (We'll get to the finishing steps eventually!)
For the second batch, I made all of the backgrounds in one piece and then cut it apart.
This is by no means a comprehensive list of ways to do backgrounds, but it gives you several different options that are all pretty simple to plan and do while you are getting started!
​
Now, on to Foregrounds! 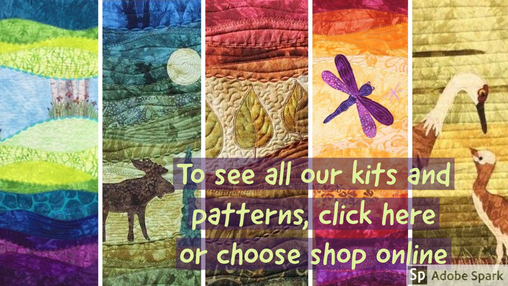